Museums and Communities in a Time of Crisis

This year marks the 175th anniversary of the Smithsonian Institution, the world’s largest museum, education, and research complex. It is also a solemn occasion to ponder how the pandemics—one novel and the other as old as our country— have impacted American museums. With doors closed and digital windows open, how have museums pivoted to stay connected to their audiences during the COVID-19 lockdown? How has the social justice movement and economic upheaval pressured museums to reconsider their operating models to better serve their communities? Lastly, what are the attitudes and expectations of museum audiences for their future museum experiences?

Bring your questions and share your hopes about the future of American museums in a post COVID world. Stephanie Stebich, the Margaret and Terry Stent Director of the Smithsonian American Art Museum and its branch museum the Renwick Gallery, offers insights from her journey leading a free national museum ranked as one of the top five most visited art museums (pre-COVID). She will share data from national audience surveys and address the controversies rocking the museum sector. Stephanie has mentored recent Columbia graduates on how to navigate the evolving new normal in the arts. Stephanie was interviewed in Columbia College Today on the occasion of assuming her new post in the nation’s capital.

With your Columbia education, which promises a lifetime of learning and a world of opportunity, what is your role in keeping American museums strong to foster understanding and healing in today’s divisive America?

There will be time allocated for moderated audience questions.

100% of proceeds from this event will be donated to the Department of Art History and Archaeology at Columbia University. 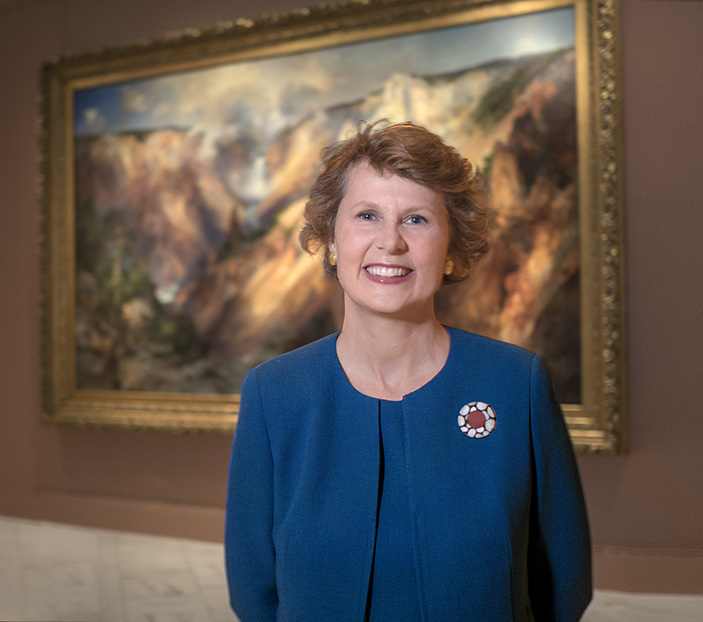 Stephanie Stebich is the Director of the Smithsonian American Art Museum, responsible for the nation’s premier collection of American art and major exhibition, research, publication, education and digital-media programs at the museum and its Renwick Gallery. Stebich serves on the Smithsonian’s Capital Board as well as the Smithsonian-London Strategic Advisory Board. In May 2018, she was named co-chair of the Smithsonian’s American Women’s History initiative.

Before coming to Washington, D.C., Stebich had been executive director of the Tacoma Art Museum from 2005 to 2017. Under her leadership, the museum underwent a major renovation that doubled its exhibition space; launched a capital campaign with a goal of $17 million and raised more than $37 million; and added endowed curator, educator and fellow positions. She oversaw the development and implementation of the museum’s strategic plan, as well as a 10-year collecting strategy. At Tacoma, Stebich championed the presentation of many groundbreaking exhibitions and secured major collection gifts, including the Haub Family Collection of Western American Art, 300 masterworks from the 1790s to the present by Charles Bird King, Thomas Moran, Frederick Remington, Georgia O’Keeffe and others; and the Rebecca and Jack Benaroya Collection, 225 works of American studio glass featuring Pilchuck School artists such as Dale Chihuly, Ginny Ruffner and Therman Statom as well as artworks by Northwest artists such as Morris Graves and Deborah Butterfield.

Stebich was assistant director of the Minneapolis Institute of Arts from 2001 to 2004 and assistant director at the Cleveland Museum of Art from 1995 to 2001. She was previously a trustee of the Association of Art Museum Directors from 2010 to 2012, where she led and implemented its diversity initiative as chair of the membership committee.