The Mysterious Affair at Olivetti

IBM, the CIA, and the Cold War Conspiracy to Shut Down Production of the World's First Desktop Computer 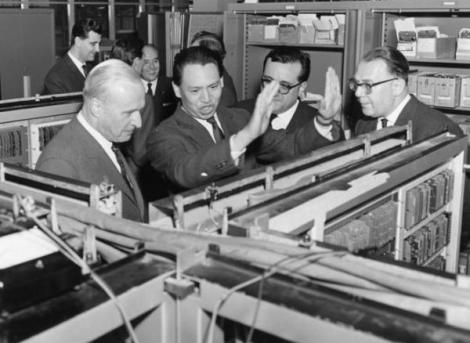 Prof. Mario Tchou was a brilliant young faculty member at Columbia, the son of Chinese diplomats who grew up in Rome. He was already carving a solid reputation as a leader in pioneering technological research when in 1961, he was killed in a car crash under mysterious circumstances on an Italian superhighway. He was the director of Olivetti's electronics division at the time, and that may have had something to do with it.

Join ColumbiaDC for a book talk by Meryle Secrest on her new biography/mystery: The Mysterious Affair at Olivetti. The book tells the story of the never-before-told true account of the design and development of the first desktop computer by the world's most famous high-styled typewriter company, more than a decade before the arrival of the Osborne 1, the Apple-1, the first Intel microprocessor, and the IBM PC 5150.

Copies of the book will be available for sale and signing.

The human, business, design, engineering, cold war, and tech story of how the Olivetti company came to be, how it survived two world wars and brought a ravaged Italy back to life, how after it mastered the typewriter business with the famous "Olivetti touch," it entered the new, fierce electronics race; how its first desktop computer, the P101, came to be; how, within eighteen months, it had caught up with, and surpassed, IBM, the American giant that by then had become an arm of the American government, developing advanced weapon systems; Olivetti putting its own mainframe computer on the market with its desktop prototype, selling 40,000 units, including to NASA for its lunar landings. How Olivetti made inroads into the US market by taking control of Underwood of Hartford CT as an assembly plant for Olivetti's own typewriters and future miniaturized personal computers; how a week after Olivetti purchased Underwood, the US government filed an antitrust suit to try to stop it; how Adriano Olivetti, the legendary idealist, socialist, visionary, heir to the company founded by his father, built the company into a fantastical dynasty--factories, offices, satellite buildings spread over more than fifty acres--while on a train headed for Switzerland in 1960 for supposed meetings and then to Hartford, never arrived, dying suddenly of a heart attack at fifty-eight. Eighteen months later, the director of Olivetti's electronics division, Mario Tchou, was killed in a car crash on an Italian superhighway, a year after Adriano, and under equally mysterious conditions. This is the story of how the Olivetti company and the P101 came to its insidious and shocking end.

Meryle Secrest was born in Bath, England, and educated at the City of Bath Girls School, a city-run grammar school strong in the arts and Humanities. Her family emigrated to Canada, where she began her career as a journalist. She worked as women's editor for the Hamilton News in Ontario, Canada; shortly thereafter she was named "Most Promising Young Writer" by the Canadian Women's Press Club. After marrying an American, in 1964 she began writing for The Washington Post, doing profile interviews of notable personalities from Leonard Bernstein to Anaïs Nin.

In 1975 she left the Post to write books full-time. Since then she has written a number of biographies; her subjects have included Frank Lloyd Wright, Lord Duveen, Stephen Sondheim, Leonard Bernstein, Salvador Dalí, Kenneth Clark, Bernard Berenson, Romaine Brooks, Richard Rodgers, and Amedeo Modigliani. She has also published an autobiography entitled Shoot the Widow.

Secrest's Being Bernard Berenson was a finalist for the Pulitzer Prize in 1980, and for the American Book Awards in 1981. In 1999 she received the George Freedley Memorial Award of the American Library Association for her outstanding contribution to the literature of the theatre. In 2006, she received the Presidential National Humanities Medal from President George W. Bush at the White House for illuminating the lives of great architects, artists and scholars of the 20th century.

She now lives in Washington, D.C.