A conversation with Ambassador Dina Kawar

Columbia DC invites you to:

Share a conversation with Her Excellency Ambassador Dina Kawar, SIPA '85

6:00pm to 6:30pm Social
6:30pm to 7:15pm Conversation with HE Kawar and Q&A
7:30pm to 8:30pm A taste of Jordan: Jordanians are renown for hospitality. To complete your evening, share a Jordanian meal. Among the Arab delicacies you may enjoy are: tahini, fatoush, baba ganoush, shwarma, kabobs, meat and cheese pies.

Jordan is a Constitutional Monarchy, known for:

• Stability in an unstable region;
• Political reforms and economic liberalization;
• Using 6% of its GDP ($2.5 billion per year) to shelter 1.4 million Syrian refugees;
• Being the first Arab nation to establish a trade agreement with the US;
• Practicing moderate Islam;
• Promoting interfaith dialogue; and
• One of the world’s great tourism magnets, the lost stone city of Petra 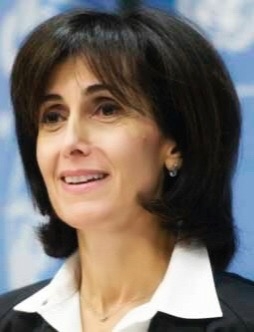 Ambassador Dina Kawar, SIPA ’85 will help us understand what makes Jordan unique among its Middle East neighbors. Success at the highest levels of diplomacy has made the Ambassador an inspiration to Jordanian girls and a role model to women throughout the Arab world.  She is well-traveled; passionate about education and preventing violence against women and children.  Born in Amman, Jordan, fluent in Arabic, English and French, she earned her BA in International Relations in 1983 in Oakland, CA at Mills College; her M.A. in International Affairs at Columbia’s SIPA in ’85; and continued in advanced studies at Harvard’s Center for International Affairs in ‘86 and ’87.

Initially a researcher and in Press Relations in the Amman Office of Prince Hassan, her abilities were quickly recognized. She became Director of his Paris Office in 1991 and moved to the same position in King Abdullah’s Paris Office in 2000. In 2001, he named her Ambassador to France; in 2002, her portfolio expanded to include the Holy See and UNESCO; and in 2005 Portugal. In 2014, she returned to the US as Jordan’s Permanent Representative to the UN and that year, as Jordan took its rotation on the Security Council, made history as the first Arab woman to, preside over that body. In June 2016, she came to Washington as Jordan’s Ambassador to the US.