A 21st Century Re-examination of “Corruption”

and What A Republic Ought to Be 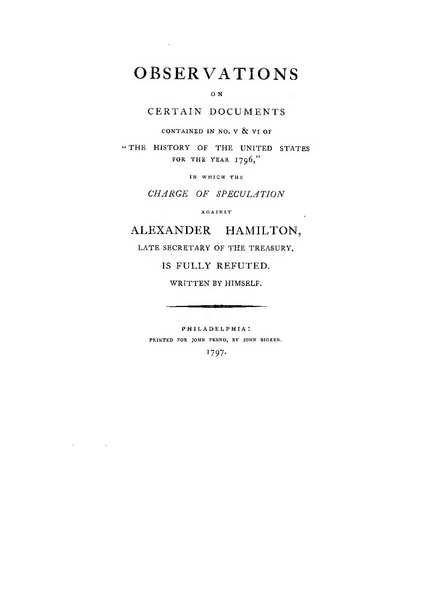 During the hot Philadelphia summer of 1787, Alexander Hamilton and the other framers of the United States Constitution worried endlessly about the possible corruption of their republic. But by the summer of 1791, the 36-year old Hamilton had become enmeshed in a seamy affair. As a result of this affair, he would submit to blackmail and, ironically, fall under the suspicion of corruption from which his reputation would never entirely recover.

Corruption, in Hamilton's day, was thought to destroy republics. But what was a republic, and how would its citizens know if it was corrupted? Using the Maria Reynolds scandal as a jumping off point, Professor Hannah Farber will explore what these terms actually meant to Hamilton and his contemporaries, and why the potential corruption of the United States worried them so much.

At first glance, an 18th-century corruption scandal like Hamilton's seems compelling because so many of its elements seem so contemporary: sex; financial wheeling and dealing; the specter of foreign influence; and personal enrichment at public expense. And yet, this lecture will ask, does an 18th-century definition of corruption tie us to an outdated, 18th century vision of what a republic ought to be? More than two hundred years have passed since Hamilton's death. Can we outdo him?

Hannah Farber is an Assistant Professor of History at Columbia University. Prof. Farber specializes in the political economy of colonial North America, the early American republic, and the Atlantic World. Her additional research interests include early modern globalization, the culture of economic life, and visual and material culture. Her manuscript in progress, tentatively titled Underwriters of the United States, explains how the transnational system of marine insurance, by governing the behavior of American merchants, influenced the establishment and early development of the American republic. She is co-organizer (with John Dixon) of the Columbia University Seminar on Early American History and Culture.

Prof. Farber received her M.A. and Ph.D. from University of California, Berkeley. Her B.A. is from Yale University.